Cochem on the Moselle in Germany

The Reichsburg Cochem was first mentioned in a document in 1130. 1151 it was by King Konrad III. occupied and declared a Reichsburg. In 1688 troops of the French King Louis XIV occupied the castle in the course of the Palatinate War of Succession and destroyed it in 1689. The castle complex remained in ruins for a long time before it was bought in 1868 by the Berlin merchant Louis Fréderic Jacques Ravené for 300 thalers and restored in neo-Gothic style was built. It has been owned by the city of Cochem since 1978 and is now under the administration of Reichsburg GmbH. 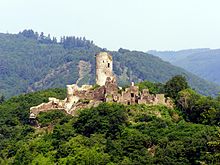 The Winneburg was built in the second half of the 13th century. It was first mentioned in a document in 1304 as the property of a Wirich von Wunnenberg. In the centuries that followed, the castle complex was steadily expanded, but remained in the possession of the Lords of Wunnenberg (later Winneburg). After this family died out in 1637, the castle came into the possession of the von Metternich family in the middle of the 17th century. In 1689 the castle was besieged, captured and blown up by French troops during the War of the Palatinate Succession. From then on, the Winneburg was not rebuilt and remained in ruins. In 1832, Prince von Metternich bought the castle ruins. However, there was no reconstruction. It has belonged to the city of Cochem since 1932. 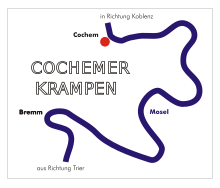 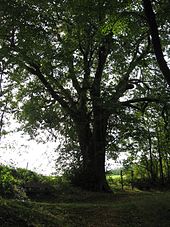 The Cochemer Krampen ends in Cochem, a winding section of the Moselle that begins about 24 kilometers upstream in Bremm and looks like a Krampen (bracket) on the map. Above the Reichsburg stands the Lescherlinde, which, due to its age of over 550 years and its character that has shaped the townscape - it can still be clearly recognized from the Cochem train station on the mountain - has the status of a natural monument. The Brauselay nature reserve with Mediterranean vegetation is located above the Cond district. Not far from Cochem, down the Moselle near the town of Klotten, there is the Dortebachtal nature reserve, which is also particularly worth seeing for hikers.